Recap / Tintin: The Secret Of The Unicorn 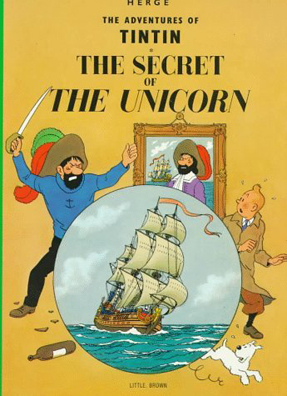 One day while browsing a flea market, Tintin comes across and buys an old model ship, thinking it would make a good present for Captain Haddock, but is immediately approached by two men who both want to buy it back from him. Tintin refuses, puzzled as to why the model is so sought after. When he shows the ship to Haddock, Haddock immediately recognizes the model as the Unicorn, a ship depicted on a portrait he has of his ancestor, Sir Francis Haddock, a captain in the service of King Louis XIV.

When Tintin returns to his apartment, he finds that the model has been stolen. Upon further investigation, Tintin and Haddock discover that the model ship is one of three models that Sir Francis made of his ship that each contains a parchment with a clue to the location of a sunken treasure that Sir Francis got from a ruthless pirate named Red Rackham.

The Secret of the Unicorn is the first in a two-part story that is concluded in Red Rackham's Treasure. Hergé once cited it as his personal favourite Tintin story, though he would later come to prefer Tintin in Tibet. Along with The Crab with the Golden Claws, it is the basis for most of the plot of Steven Spielberg's 2011 film adaptation.