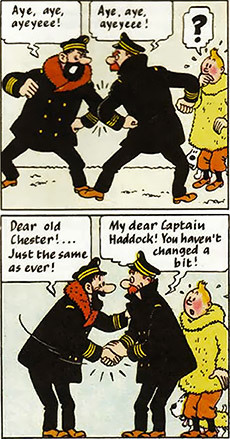 A character is accosted by a stranger. Maybe he's a burly biker or a rude cop. They start arguing, and just when it seems the biker guy will break the other character's neck...

...they hug and start reminiscing about old times. They knew each other all along!

A good way to add some fake conflict on otherwise boring conversation scenes and to prepare hilarious pranks. A common way for a pair of Vitriolic Best Buds to be introduced.

Contrast We Used to Be Friends.