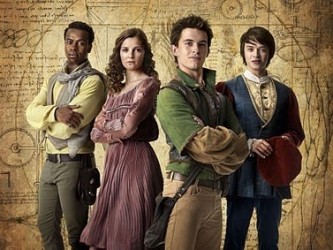 Leonardo is a CBBC series about a teenage Leonardo da Vinci (played by Jonathan Bailey).

It's set in 1467 Florence, where young Leo is an apprentice artist, and spends his spare time designing fantastic machines and hanging out with Lovable Rogue Niccolo "Mac" Machiavelli (Akemnji Ndifornyen) and Lonely Rich Kid Lorenzo de' Medici (Colin Ryan). In the first episode they meet Tomaso (Flora Spencer-Longhurst), who also wants to be an artist.

However, a sinister society has discovered Leo's mechanical designs. This group tricks Tom into stealing Leo's notebooks, wanting to create war machines that will let them overthrow the Duke of Florence. Leo and his friends (including Tom, who turns out to be a girl called Lisa) have to stop them, unaware that they're led by Lorenzo's father.

A second season began in September 2012, in which Piero's schemes see Florence approach war with Milan.