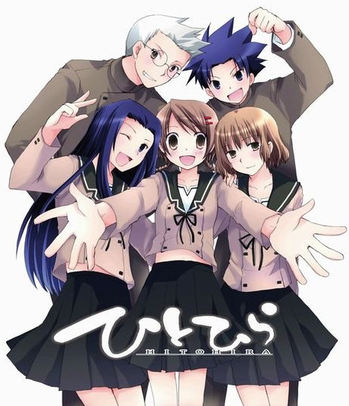 A very shy girl and a School Play. How are these two going to fit?
Advertisement:

Asai Mugi has just joined her new high school. She's still unsure on what club to join, when she was spotted by Ichinose Nono, president of the Drama Research Society, and was force drafted into the club herself. The problem is that Mugi is extremely shy and easily cracks under pressure, especially when talking to many people — which at times even leads to her fainting. And now she is pressured into performing at school plays, which doesn't bode well for either her well-being or that of the club she got pulled into.

To complicate matters further, the Drama Research Society's existence is threatened by the Drama Club, which it is a splinter of. There appears to be much personal animosity between Nono and the president of the Drama Club, Sakaki Mirei — but things are not as straightforward as they first appear.