Due to its nature as a sequel, spoilers for Uncharted: Drake's Fortune and Uncharted 2: Among Thieves will be left unmarked. You Have Been Warned! 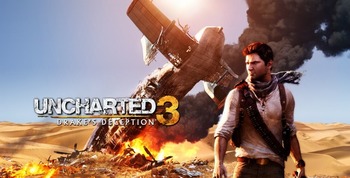 "All men dream. But not equally. Those who dream by night in the dusty recesses of their minds wake in the day to realize it was vanity. But the dreamers of the day are dangerous men. For they may act their dream with open eyes, to make it possible. This, I did."
—T. E. Lawrence, Lawrence of Arabia (opening quote)
Advertisement:

Uncharted 3: Drake's Deception is the third game in Naughty Dog's Uncharted series. It was originally released on November 1, 2011 for the PlayStation 3.

Since starting his career, Nathan Drake has carried a ring from Sir Francis Drake around his neck, which he believes will help unlock a great secret. Finally offered the opportunity to put his quest into motion, he gathers a team of his associates, including Sully, Chloe, and newcomer Charlie Cutter to aid him in the prospect, but along the way he comes into conflict with an enemy from his youth who seeks the same end, and stumbles upon a centuries old conspiracy in the process.