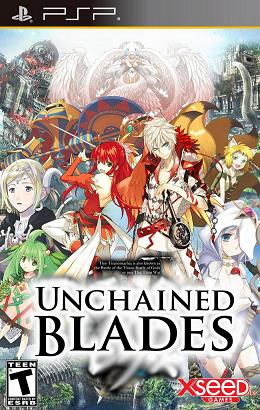 Legend tells of the Titans, colossal creature-shaped dungeons through which brave men and women must go through to be deemed worthy of approaching the goddess Clunea, with the promise of fulfillment of a single, heartfelt wish.

Three individuals test the legend: Fang, the arrogant Dragon Emperor who yearns for the greatest fight of his life; Tiana, a Phoenix Princess who simply yearns to be free of her royal burden; and Lucius, an enigmatic swordsman riddled with a terminal illness who yearns to see Clunea at all cost.

Unchained Blades ("UnchainBlades REXX" in the original Japanese version) is a dungeon crawling RPG released on the PlayStation Portable and 3DS in Japan on 14 July 2011. The game was also localized by XSEED in North American with a digital only release on June 26, 2012 for the PSP, and on January 3, 2013 for 3DS.

A unique feature of the game is recruiting enemies sufficiently weak enough to be "unchained" — that is, being freed from their feral nature. This turns them into Monster Allies ("followers") that can be equipped to the main characters ("masters"). When equipped, these monsters enable certain skills to be used depending on the monster's characteristic "anima" (for example, to use Flame Strike you need to equip a monster that has Fire Anima) and at the same time function as meat shields for the masters, taking enemy attacks and sometimes completely deflecting them.

A sequel ("UnchainBlades EXXIV") was released in both formats on November 15, 2012. This time it focuses on the fallout of the usurpation of Clunea's position by a rogue god named Zodias, and focuses on a new trio of protagonists — Ryuga, the last of the Ouroboros dragons; Sofia, an amnesiac avatar of Clunea created immediately after her downfall; and Hilda, a tomboyish demon swordswoman who only wants to be "manly".