Video Game / The Legend of Heroes: Trails of Cold Steel 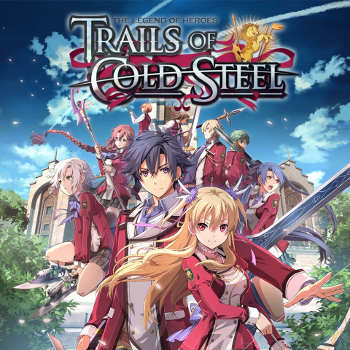 The Legend of Heroes: Trails of Cold Steel (英雄伝説 閃の軌跡, Eiyuu Densetsu: Sen no Kiseki) is a tetralogy within Falcom's long-running Trails Series RPG franchise, as well as the third arc following the Trails in the Sky trilogy and Zero/Azure duology, the first half occuring in roughly the same time frame as the latter and the second half inheriting a number of storylines due to Trails to Azure's Bittersweet Ending.

This tetralogy is a game-changer for two reasons: first, the story moves to the Erebonian Empire, an expansionist superpower which has cast a long shadow over the Kingdom of Liberl and Crossbell State, where much of the action from the first two arcs took place; and second, the franchise finally makes the switch to full 3-D.

The game's release chronology is as follows:

In the first two games, set in the years S.1204-1205, players take on the role of Rean Schwarzer, a new student at Erebonia's prestigious Thors Military Academy in the town of Trista, just outside the imperial capital Heimdallr, who finds himself placed in Class VII, a most unusual assortment of students from both the nobility and commoners. There, he faces not only exams and field work, but also a student body fractured along lines of social class, a willful teacher with an unorthodox approach to education, and his own insecurities. And in the background, even as Erebonia begins to expand its reach across the continent of Zemuria, its class conflicts begin to slip into open war.

In the last two games, set a year later, the original Class VII has since graduated and moved on with their lives, with Rean taking up a position as teacher for a new Class VII at the Thors Second Branch School at the town of Leeves. Even as they take up missions on behalf of Erebonia, they and their teacher will also have to deal with their personal demons even as they begin to pry deeper into Erebonia's terrible secrets, some of which lead back to Chancellor Giliath Osborne, the architect of the Empire's expansionism. And it will take the combined efforts of Rean, his former classmates, his students, and other friends—as well as a few familiar faces—to stop Osborne's ambitions, even as they discover that not everything is what it seems.

There are also two audio dramas associated with the series, each attached with the first two games. Transcriptions

of both can now be found at the official website for the second game.

The first two games have been localized worldwide by XSEED Games, and the latter two by NIS America.

On March 9, 2021, President Toshihiro Kondo announced that an anime adaptation

is in the works and is scheduled to be released in 2022. Funimation has not only acquired the license to air the anime in the USA, but is named a co-producer of the anime. In January 2022, it was announced the anime, now officially titled Trails of Cold Steel - Northern War, had been delayed to 2023. It is set to cover the events of the Northern War which takes place between Cold Steel II and III from the viewpoint of a new female protagonist.

The tetralogy is immediately followed by Trails into Reverie, released in August 2020 and which is mainly set in Erebonia and Crossbell, however other new locations appear as well.

Example of:
Cutscene Power to the Max