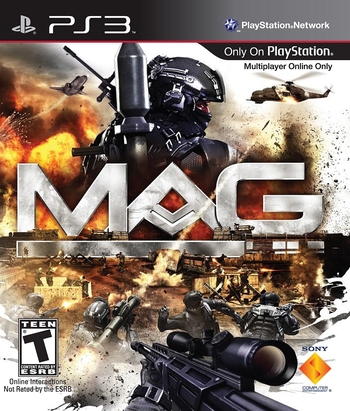 The world is at peace! The Millennium Accord was signed by all the major world powers sometime in the second decade of the 21st century. Restricting military engagements to purely defensive roles, the Accord was written to prevent the outbreak of war by imposing severe punishment on any country that starts a war of aggression. With their military forces confined within their own borders, and strategic resources dwindling, countries turn to private contractors to fulfill their objectives. And so, the dawn of the PMC began, giving birth to three major mercenary companies.

Predictably, these PMCs are not at peace. Rather, they're trying to knock each out of business. Tired of buyouts, selling, downsizing, and so on, the three remaining PMCs decide that their companies will do better if they wipe out their competitors. As a result, they attack each other over strategically important resources, such as information, experimental vehicles, next-generation power facilities and oil refineries, hoping to convince potential clients that their competitors are weak, and they are strong. Naturally enough, things escalate as World War III erupts between the factions in a Shadow War that consumes interests of all three major factions.

The factions involved are:

The game is exclusively online multiplayer team vs. team on a variety of different maps, each with different objectives, as follows:

The game was developed by Zipper Interactive (the same studio behind SOCOM) and published by Sony Computer Entertainment.

The game's multiplayer servers were shut down on January 28th 2014, four years after release. As the game had no single player component, it is now a Defunct Online Video Game that is no longer possible to play.

Examples of Tropes by PMC