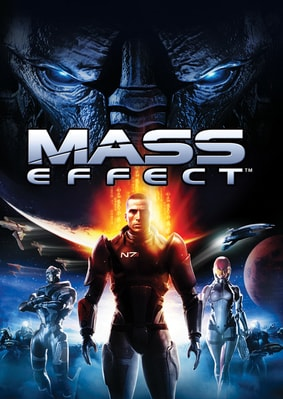 The hero(ine) with a thousand faces. Literally.
"Not just for our own sake but for the sake of every other species in Citadel Space, Saren must be stopped. And I promise you all: we will stop him."
— Commander Shepard
Advertisement:

The first game in the Mass Effect series.

The year is 2183, thirty-five years after humanity has discovered a cache of technology on Mars from a long extinct alien race. This technology enables them to travel great distances throughout the Milky Way and join a community of alien races based at an ancient complex called the Citadel.

The plot revolves around one Commander Shepard, a military officer who becomes the first human Spectre, a member of an elite interplanetary peacekeeping force. They are tasked with tracking down a rogue Spectre named Saren Arterius, who has apparently allied himself with the geth, a race of murderous robots. As the storyline progresses, Shepard explores a variety of worlds, encounters a wide range of sapient species, and uncovers an ancient plot involving the coming doom of every sapient organic being in the entire galaxy.

There is a selection of plot-relevant missions and, if you focus exclusively on those, the game would be in the realm of 9-10 hours, but being an RPG, there is an entire galaxy for you to explore as you engage in assignments, expanding the game to upwards of 25 hours or more. The game lacks a traditional good/evil Karma Meter, and instead gives you options on how to proceed with each encounter based on the Sliding Scale of Idealism Versus Cynicism; you are a hero either way, but your heroism can range from Knight in Shining Armor to Unscrupulous Hero. You can choose whether to recruit all of the characters optioned to be part of your crew or ignore them and do it all yourself. You even have the option of different characters to pursue a romantic relationship with if you so desire, including a possible Love Triangle.

The weapons within the game do not have ammunition, instead replacing it with an "overheat" meter that limits how long you can fire your weapon before you need to pause for a cooldown, but there are modifications available within the game that allow for non-stop firing. You are also able to customize the equipment of yourself and your squad, including which specific weapons you take into battle, the armor you wear and various perks and enhancements.

The game put BioWare on the map when it came to original IPs. It was widely praised for its story, Worldbuilding and interactivity, but received a cooler reception for its gameplay. Main criticism points were a menu system that over-complicates the RPG elements, unrefined Third-Person Shooter gameplay, and overuse of Copy-and-Paste Environments in non-plot-related missions. Choices made during the course of this game transfer over to its sequel, and from there into the third game.

The game received a lot of media attention and criticism for a sex scene between Shepard and a romantic option late in the game, which was perceived by certain Moral Guardians as being a Hot Coffee Minigame.Details Fox News talked to an author of a book on media influence, Cooper Lawrence, who proceeded to pick apart the moral values of the game despite admitting she had never played it and did not understand the game at all. In contrast, Geoff Keighley was also interviewed and explained in detail what the game was about and that it was just a cutscene and did not actually "emulate" a sexual encounter (i.e., giving the player options on what to do during the act). When Lawrence later watched approximately two hours of gameplay, she recanted her criticism: "I've seen episodes of Lost that are more sexually explicit." Jack Thompson, of all people, believed that the media storm was overblown and unnecessary.

Before Harbinger, Sovereign assumed direct control of Saren's corpse in a final attempt to kill Shepard.

Before Harbinger, Sovereign assumed direct control of Saren's corpse in a final attempt to kill Shepard.