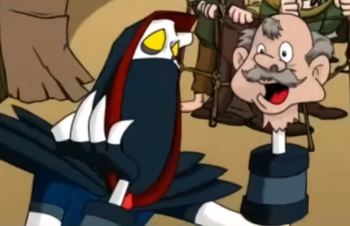 "Or after I lop it, I make a puppet, On top of a staaaaaaff"
"It's like putting on a cute puppet show at your great aunt's funeral! WITH YOUR GREAT AUNT!"
— The Nostalgia Critic, Alaska review
Advertisement:

Killing somebody in cold blood is generally considered bad. So is desecrating their corpse or making light of their death.

...Hey! Wouldn't it be awesomely evil if we did all three at once?

Making a Dead Guy Puppet is a simple process: Simply take a corpse (preferably of somebody you've slaughtered yourself) and use him as a makeshift marionette or ventriloquist dummy. You can even make an easy-to-carry Hand Puppet variant simply by cutting off the corpse's head. Be sure you do your routine in front of the corpse's friends and family — they'll love it!

A variation of this is The Undead, when the puppet is made Back from the Dead via necromancy.

This is usually done mostly For the Evulz and generally qualifies as a Kick the Dog action. Naturally, villains who use this tend to have a bad sense of humor. Alternatively, this can be used as a means of communications for villains lacking the human anatomy or brain unction required for speech, justifiying their ability to speak with other characters.

By the time Miss Annity gets to him, Peter is a corpse being puppeteered by her webs as part of a moral lesson.

By the time Miss Annity gets to him, Peter is a corpse being puppeteered by her webs as part of a moral lesson.