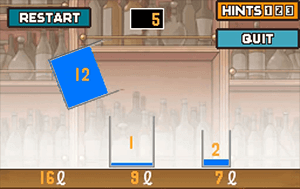 You have two containers, one that holds 3 liters and one that holds 5 liters, and access to a water source. Place exactly 4 liters of water into either a third container (one that holds at least 5 liters, so that you can't simply fill the container to the brim and be done with it) or the 5-liter container (depending on the version).
Advertisement:

This puzzle dates back at least as far as the 1920s, and quite possibly earlier still. Some versions replace the jugs with sand timers for cooking eggs and the liters with minutes.

One solution is as follows:

Another alternate solution, though this one requires several assumptions: The containers must have at least one line of symmetry when looking at them from the top, and they must have a constant width. (Cylinders or rectangular prisms meet this requirement.)

It bears noting that this puzzle, like many other stock puzzles, is usually difficult only because the solver is overthinking it. In practice, if you actually have the two jugs, and you just start filling one jug and pouring it into the other, the solution presents itself very quickly. (This is incorporated in some tellings of the riddle, which demand that you come up with the answer in less than a minute, as An Aesop about the value of trying things out rather than just sitting there thinking.)

Maths nerd bit: You're looking for the smallest integer x and y that satisfy 3x−5y=4; then fill the 3-liter x times, pouring it into the 5-liter when full, and emptying the 5-liter when it's full (which you'll do y times). The solution is x=3 and y=1. The solution up there is the dual formulation, 5x−3y=4 (x=2, y=2). From here, two details present themselves: one, that it's easily adaptable to values other than 3 and 5, and two, that a solution exists only if the target value is a multiple of the highest common factor of the container sizes (e.g. you can't get 4 liters from 6- and 3-liter containers).

Not necessarily related to Solve the Soup Cans.