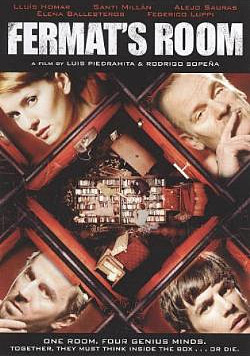 Four mathematicians receive a mysterious letter in the mail, and are given an offer: if they can identify the pattern of the numbers in the letter, they will be invited to work on the greatest mathematical enigma of all time. The letters are signed only, "Fermat." The four accept, and are given aliases - Hilbert, Galois, Pascal, and Oliva. Upon arrival, they realize they are trapped, and the only way to prevent the walls from closing in is to solve a never-ending sequence of brain teasers. Along the way, the characters' secrets come out as they speculate on their host's true motives.