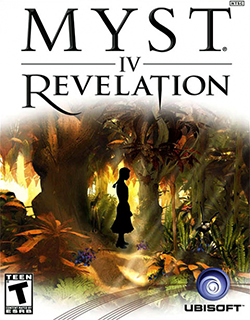 Myst IV: Revelation is the fifth game in the Myst series. This game was developed and released by Ubisoft in 2004. It was so big and pretty that the game had to be put on a DVD-ROM instead of a CD-ROM, an uncommon occurence in 2004. Rand Miller once again reprises his role as Atrus.

This game retcons the end of Myst. It ends up Sirrus and Achenar were not trapped in Prison books that Atrus destroyed, killing them, but are stuck in actual Ages and Atrus only destroyed their Linking books. Twenty years later, Atrus has made new Linking books to their Ages and invited the Stranger to act as their one person parole board.

Before the Stranger can see if they've repented, a explosion knocks the Stranger out, and Atrus' and Catherine's daughter Yeesha disappears in the chaos. The Stranger wakes up and goes into Sirrus and Achener's Prison Ages of Haven and Spire to locate Yeesha.