ZapDramatic's logo
"Could there be a giant conspiracy theory that would force a guy to put a bomb on himself, jump out a window, land in a mattress truck, hitchhike with the very people that’s conspiring against him and then end up in a psychological assessment where it turns out he’s actually sane and may be under this drug Paxwic which is a drug made to produce the perfect soldier? I think not."
— slowbeef, summing up the plot of Ambition for Retsupurae
Advertisement:

is a website run by Michael Gibson (who also goes by "crageous" as a username, in reference to his company's original name, Courageous Communications), a Canadian man who creates negotiation games for both entertainment purposes and diplomatic groups. Thus far, he has created games for episodic series such as Ambition

; several one-offs that led to the development of those series, some of which are available for free on Newgrounds

; and full university courses about negotiation

and having difficult conversations

In each game, you play a Featureless Protagonist tasked with helping the characters solve various problems using basic negotiation tactics. You are presented with multiple choices of what to instruct the characters to do or say, and different choices lead to different outcomes. There is usually only one correct path, however.

The Negotiator is the blanket title for shorter games about one-on-one interactions where the player is given some Backstory about their character, then must choose the correct lines of dialog to convince another character to give the player something they want or to avoid some punishment. Altered States is the same concept, only with the admission that the opponent characters are dangerously disturbed individuals who often make wildly irrational decisions.

The Mediator refers to games in which the player must help two other opposing parties find an acceptable compromise for their dispute. The first episode, "The Angry Neighbors", features a unique gameplay mechanic where the animated characters will continue arguing on their own until the player presses a Stop button to jump in with an attempt to steer the debate in a more positive direction.

In the Ambition series, you are tasked with helping a disturbed man named Ted Hartrup reunite with his kids, who are in the care of his estranged wife, Bridget. Along the way, you'll also meet Yale and Helen, a dysfunctional couple trying to weather their shaky marriage. Numerous scenarios will play out involving these characters in which you must decide what you or they must do to alleviate the situation, with subjects such as adultery, interrogation, and even some murder thrown into the mix.

Move or Die plays like an interactive animated adventure movie. The User assumes the role of a hitchhiker who gets picked up by two ethically challenged siblings in their twenties, Syd and Wilma. When bad things start to happen, the action will stop and a menu screen will appear asking the User for input. The User negotiates with Syd and Wilma and tries to persuade them to make better choices. If the User advises poorly or fails to persuade Syd and Wilma to choose a better course of action, the movie will end in disaster and the action will stop. The only way for the User to see the whole movie is to learn from past mistakes and negotiate more effectively.

Sir Basil Pike Public School explores the dynamics of bullying among boys and girls aged 10-14. The user can follow either the boys’ story or the girls’ story. Both stories intersect for the conclusion. In the boys’ story, the user is accused of stealing another boy’s bike. At issue is the truth and honor. The girls’ story revolves around a sleepover party where all but one is invited and the consequences of being nice or competitive are explored. It features characters who had previously appeared in Gibson's other works, as well as new ones. It also adds the new feature of "Persuasive Power," which is a good indicator of whether or not you are making the correct choices.

Keeping in mind that while Gibson mainly intended these games as viable negotiation training for real-life situations, they are somewhat notorious for their... odd depiction of their characters, as they frequently invoke numerous violations of common sense, skewed priorities, and other unusual behavior that would all likely be counterproductive for these scenarios should they actually play out in real life. But even that itself is unlikely.

As such, Ambition, Sir Basil Pike Public School, Move or Die, and several of the Negotiatior/Altered States games have been riffed on by Retsupurae.

Not to be confused with Ambition Is Evil, though it does contain examples of that trope. 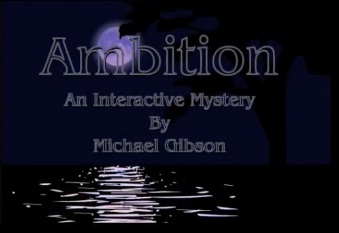 The series' logo.
Tropes appearing in Move or Die