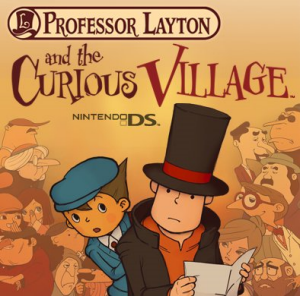 The first game in the Professor Layton Widget Series, released in Japan on February 15th, 2007.

Layton and Luke search through the eponymous St. Mystere for the Golden Apple, which was hidden there by the late Baron Reinhold; the will of the baron states that whoever finds it will inherit his immense wealth. Of course, the village hides quite a few secrets as well...

The game would get an HD re-release for Android and iOS in May of 2018 titled Professor Layton and the Curious Village EXHD for Smartphone, adding in new cutscenes and up-rezes everything else from the choppy 240p of the DS.