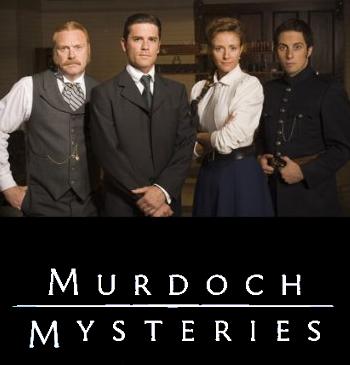 "Perhaps someday, everybody will be as fascinated with pathologists and police detectives."
— Detective William Murdoch
Advertisement:

Murdoch Mysteries is a Canadian detective series set in late nineteenth- and early twentieth-century Toronto, based on a series of novels by Maureen Jennings. The series centers around William Murdoch (Yannick Bisson), a detective in the Toronto constabulary with an interest in using then-unorthodox/unknown forensic techniques for catching criminals. Murdoch is assisted by Constable George Crabtree (Jonny Harris) and Doctor Julia Ogden (Hélène Joy), The Coroner. His boss Inspector Thomas Brackenreid (Thomas Craig) is usually skeptical of Murdoch's methods but doesn't complain too much, just as long as they catch the criminal in the end.

For five seasons, the series was broadcast by Citytv. The fifth season was supposed to be the last, however, rival broadcaster CBC picked up the series in 2011 and has been broadcasting new seasons since; beginning with the sixth in 2012. In the seventh season, The character of Dr. Emily Grace was added to the main cast. A fifteenth season is in the works. Outside of Canada, the series has aired on Ovation TV in the United States, under the title The Artful Detective.

The series was preceded by a trilogy of TV movies in 2004, which were more direct adaptations of the Murdoch Mysteries novels. With Peter Outerbridge as Murdoch, Keeley Hawes as Dr. Ogden and Colm Meaney as Inspector Brackenreid. Overall, they were much darker and grittier than the TV series. In 2017, a sequel series called Frankie Drake Mysteries was launched.

The series now has a Character sheet and Recaps.

Miss Hamilton returns in "Murdoch in Ragtime", still trying to get the Blind Pig shut down. When the suffragist "Furious Four" ally with the Temperance League before an election, she wants the candidate to support banning books, and she states she'd like to burn Mark Twain's works.