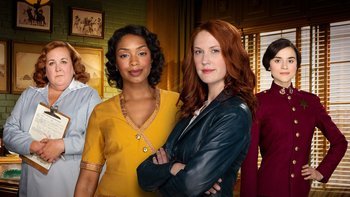 Frankie Drake Mysteries is a Canadian TV series, which premiered on CBC in 2017. The series is Historical Detective Fiction that mixes Crime, Mystery, Period Drama and Noir. It was created by Carol Hay and Michelle Ricci, and is set in the same universe as Murdoch Mysteries.

Frankie Drake (Lauren Lee Smith) is the first female private detective in 1920s Toronto. Frankie's best friend Trudy is her crime solving partner. Mary Shaw is a Morality Officer who comes from a law enforcement family, and she longs to follow in her father's footsteps. Flo completes the team: She's a morgue attendant. She's also a war widow who's putting herself through medical school at night.