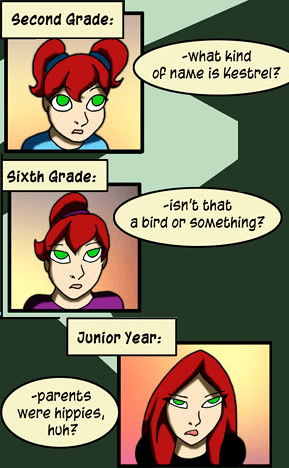 Lupin: And this is Nymphadora.
Tonks: Don't call me Nymphadora, Remus. [shudders] It's Tonks.
Lupin: Nymphadora Tonks, who prefers to be known by her surname only.
Tonks: So would you if your fool of a mother had called you "Nymphadora".
— Harry Potter and the Order of the Phoenix
Advertisement:

Similar to Embarrassing Middle Name and Embarrassing Last Name, this trope covers instances when a character has a first name that they don't like to be called by. Such characters use a variety of tactics to avoid their real first name:

This does not necessarily need to cross Unfortunate Names territory. Most of the time, the first name is a very normal one that only sounds embarrassing to the bearer, especially if the bearer is trying to be intimidating or respected but has a too humble name; when this apply to a villain, see Tom the Dark Lord. A Giver of Lame Names causes this. If people continue to call the character by that first name anyway, it may lead to a Do Not Call Me "Paul" scenario.