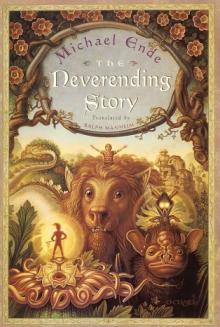 A troubled, insecure young boy named Bastian who loves to read happens upon an antique bookstore owned by a Mr. Coreander, when hiding from some bullies. Inside Mr. Coreander's shop, Bastian comes across a book titled The Neverending Story, which claims to have No Ending. Unable to resist, Bastian steals the book and hides in the school attic where he can read it undisturbed. In the book is the story of an otherworldly Magical Native American boy named Atreyu on a quest to save a Magical Land from vanishing. As Bastian reads more and more of the story, he finds that the book seems to be aware of him. Eventually, it is revealed that the magical land within the book is actually another dimension encompassing all of human imagination, and only a human with creative ideas can save it.

The story purposefully has lots of loose ends (in the form of left-off side stories and secondary characters), to drive home the point that it is a "Neverending Story". In addition, there was a scene in the original novel where to convince Bastian that this was "real", the Childlike Empress tells the Historian to read the story over. Which includes what Bastian had done that day. This gets them all stuck into a timeloop until Bastian accepts it and enters the story.

Has received three major film adaptations, though only the first film tried to follow the plot of the novel, being an adaptation of roughly the first half, with the second only making a few loose references to the book's plot (mainly the second half), and the third one going off to do its own thing entirely. There was also a short-lived Animated Adaptation, and a TV miniseries called Tales From The Neverending Story that created an entirely new plot loosely based on the premise of the book and its characters. More recently, the Warner Bros. fighting game Multi Versus was announced to have The Nothing as the major antagonist/driving force.

The people who read this story and found these tropes and edited this page went on to read other stories, and find other tropes, and edit other pages, and other adventures besides. But that is another story, and shall be told another time...