Reading Ahead in the Script 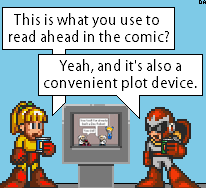 Fourth Wall? What Fourth Wall?
"I didn't look too far into it since I don't like spoilers, y'know, ruins the fun in the story."
— Pinkie Pie, Turnabout Storm
Advertisement:

Usually a comedy trope, and a part of behind the scenes comedy. But sometimes this trope can be played straight with something else standing in for the script, such as when a children's show is doing a "Reading Is Cool" Aesop story which rips off from one of the classics, and the children in the show are outright reading the classic book in question to see what comes next in their plot.

A type of Medium Awareness (and, by extension, often a sign of No Fourth Wall in the comedy variation). Closely related to Noticing the Fourth Wall; also compare Genre Savvy, This Is the Part Where..., and Reading the Stage Directions Out Loud. Will often prompt a "Who Writes This Crap?!" reaction in Self Parodying works. Contrast both Surprisingly Realistic Outcome and This Is Reality. Can overlap with Animated Actors.

Pinkie Pie knows where to go next because she reads the script in advance.

Pinkie Pie knows where to go next because she reads the script in advance.