This Is the Part Where... 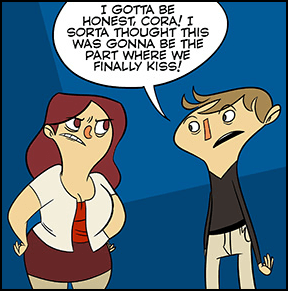 "...you fall down and BLEEEED to death!"
— Every hostile NPC, The Elder Scrolls IV: Oblivion
Advertisement:

This is the part where we describe the topic.

Used by Genre Savvy characters to point out that, if this were a movie, a trope would be coming into play right about now, or just to show how well they know the other character(s) in the scene. Sometimes, but not always, they are proven right. A type of Lampshade Hanging and frequently a case of Leaning on the Fourth Wall. Sometimes ends up with the characters being Wrong Genre Savvy or being wrong in some other way. And sometimes, it's the kind of discussion about tropes that doesn't involve claiming that the trope is about to manifest (though even then, the trope often does come into play immediately, just like the version where a Genre Savvy character is making a prediction about what happens next).

Not to be confused with In Which a Trope Is Described. Compare Pre-emptive Declaration.

This is the part where you add examples: