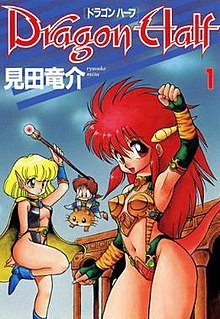 Half Human. Half Dragon. All Trouble.
Advertisement:

Dragon Half is a seven volume ecchi fantasy manga starring the titular half-human, half-dragon teenage girl Mink. The manga was serialized in Dragon Magazine from 1988 to 1994, and it received a two-episode OVA adaptation in 1993. Basically, the story is an Affectionate Parody of fantasy as a genre, with plenty of Fanservice and self-referential humor.

Mink goes on a grand adventure as she pursues the man of her dreams, singing idol Dick Saucer. Unfortunately for Mink, Dick Saucer is a dragonslayer as well as a singer... and further complicating Mink's pursuit of the studly Saucer is Princess Vina, the daughter of King Siva, who also desires his attention. While a powerful sorceress, the princess has an unfortunate tendency (inherited from her mother) to turn into a small blob of intelligent slime at inopportune times.

Prodded by his daughter and seeking revenge on Mink's father (a royal dragonslayer who "betrayed" the king by running off and marrying the dragon he was supposed to slay), the king sets several plots in motion against her, including sending out an assassin, a brain-dead, underfed knight who stores his lightsaber in his head, and hiring Saucer himself to slay the "disguised" dragon. Ultimately, Mink overcomes these obstacles, and finds herself competing in a fighter's tournament, and going on a journey to defeat the demon king Azatodeth so she can gain his People Potion and become human, just for a chance to meet her idol.

Although the anime is mostly silly, the manga is both silly and epic. It also features some very strong Art Evolution.

The manga received an official English release in 2018.

"My Omelette", written to the music of Beethoven's Symphony No. 7 (4th movement).

Example of:
Rock Me, Amadeus!

"My Omelette", written to the music of Beethoven's Symphony No. 7 (4th movement).