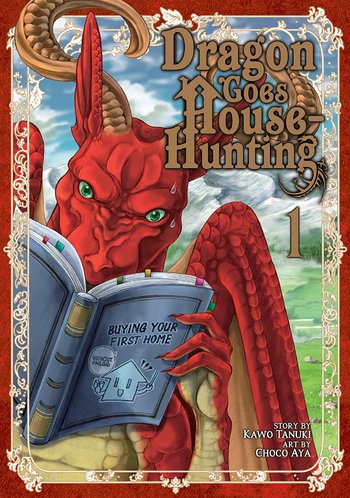 Hear the tale of the poor Red Dragon Letty. While dragons in general have a reputation for being some of the fiercest creatures in the realm, Letty is quite the opposite - timid, passive, and about as dangerous as an overgrown rabbit. Naturally, the mere thought of someone like him surviving on his own in a world full of every conceivable sort of fantastic peril is nigh impossible, so it's a good thing he's got his family to protect him, right?

Of course, after Letty utterly fails to guard the family nest from hunters, he's swiftly kicked out and forced to fend for himself. Doomed to fall prey to any number of adventurers wanting to make him into a new shiny armor set, his only chance to survive is to find a nice, safe place to call home. After exhausting every possible avenue he can think of to secure a house on his own, Letty meets Dearia, an elf who's highly learned on home acquisition and will gladly find a suitable living space for even a creature like him. Together, they embark on a journey to explore the world filled with fantastic wonders, scoping out one locale after another to find Letty's dream home... and making sure he doesn't wind up slain for EXP before he gets there.

Dragon Goes House-Hunting (Dragon, Ie o Kau./ドラゴン、家を買う。 in Japanese, lit. "Dragon Buys A House") is a manga written by Kawo Tanuki and illustrated by Choco Aya. It can be described as a lighthearted comedic romp in a fantasy setting that plays with many tropes associated with fantasy worldbuilding and RPGs. It was serialized in Monthly Comic Garden starting in 2016, with Seven Seas Entertainment licensing the English release. An anime adaptation by Signal.MD was announced in 2020, premiering in April 2021.