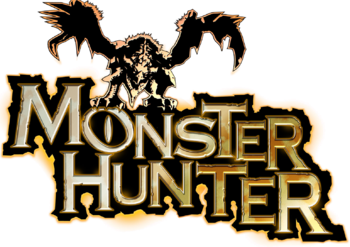 Monster Hunter is one part Action RPG and one part MMORPG, cooked by a pack of anthropomorphic cats and lifted from the flames the second it turns a delicious bronze hue, all to the sound of a surprisingly cheerful jingle. So tasty!

Developed and published by Capcom for the PlayStation 2, the original game wasn't as big a success in the United States as it was in Japan, where it still did all right enough to get an expansion. However, the portable version of the game went on to become a Killer App for the PSP in Japan, and the portable sequel versions went on to define the Japanese PSP userbase, even as subsequent sequels also got released on the Wii, Wii U, and Nintendo 3DS (the latter of which finally eclipsed the PSP for a time as the series' main platform).

Monster Hunter is a unique video gaming experience, and has gone on to establish the "Hunting RPG" style. Playing as a hunter assembled from a list of faces, voices, etc., you try to make a name for yourself battling an array of increasingly bigger and nastier creatures that can kick your ass shockingly fast if you're unprepared and/or rush them head-on as if they're Mooks. Various attacks and actions performed by the Hunter such as sprinting or dodge roll are tied to a limited Stamina bar. And each weapon types has their own unique attacks, quirks and special resources they build up and consume in very specific manners during combat that have to be micro-managed if the player wants to beat a hunt proper. Each Monster not only has a variety of attacks, but a number of both subtle and overt visual and audio cues to each action, as well as its own status. Recognition of these cues is crucial to properly defeating them. A typical Monster Hunter battle may feel sluggish, but mastering the system has a graceful Zen-like quality to it, like a human wielding weapons twice their size against a 7-ton electric angry gorilla (or wyvern, or dragon, or Giant Enemy Crab) should.

The weapons and armor store is pretty weak, and everything they sell will be out of date only a few hours from starting the game. To get better equipment, the player has to assemble their own equipment from parts of fallen monsters as well as activities like combining, mining, fishing and bug collecting.

Players can hunt by themselves, and when doing so in more modern games they can bring along up to two CPU-controlled support characters who perform actions like attacking monsters and performing healing and buffing abilities. In console games, players can go online to hunt together in parties, while portable games have historically eschewed online support in favor of local wireless multiplayer, the idea being that you actually meet with your hunting buddies in person to do quests with them. This changed with Monster Hunter 4, the first portable game to feature online multiplayer and the first game in the entire series to offer both flavors.

, while Rise isn't too far behind at four million copies in three days. Cha-ching! The series currently stands at 75 million units sold as of June 2021

, second only to Resident Evil, but nearly double the total sales of Mega Man and triple that of Devil May Cry. In 2017, a female Monster Hunter was added as a DLC character to Marvel vs. Capcom: Infinite, with her moveset containing many weapons and items from the series. Also, its iconic monster, the Rathalos, has made appearances in Metal Gear Solid: Peace Walker,note along with other monsters. Portable 3rd would have some Metal Gear items in return Final Fantasy XIV,note as part of a Cross Promotion with World which would have a hunt involving Behemoth from Final Fantasy Super Smash Bros. Ultimate and Dragalia Lost.

Not to be confused with the PC game, Monster Hunter (PC).

The number of games released are classified under "generations". Here's the list of the main series and spin-offs: