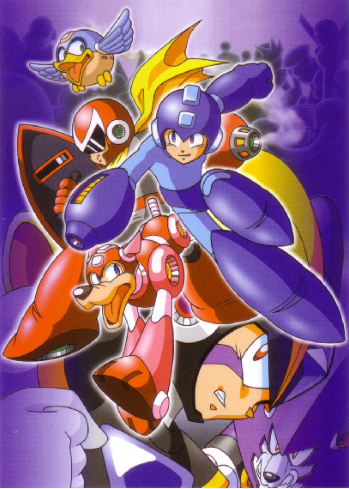 Mega Man: The Power Battle is an Arcade Game released by Capcom in 1995. Based on the Mega Man (Classic) series, the player (or two, for the first time in the series) is once again tasked with defeating six Robot Masters (gaining their weapons in the process) before proceeding to take on Dr. Wily himself.

Unlike most games in the series, however, there are no stages; instead, the gameplay resembles a Fighting Game (as the player(s) and boss face each other one-on-one in a small arena), albeit retaining the usual Mega Man controls. It's also notable for being the first game in the franchise where the player could choose a character (Mega Man, Proto Man, and Bass — though they all play roughly the same). Also, instead of the traditional stage select, you instead choose a boss through a roulette (that obfuscates exactly who you've chosen). The player is also able to select which set of bosses they want to face (1-2, 3-6, and 7), which roughly represents the difficulty level.

While the cabinets are hard to find in America, it was included as an unlockable in the Anniversary Collection and Capcom Arcade 2nd Stadium (alongside its sequel). It was also bundled with its sequel for the Japan-only PlayStation 2 game Rockman Power Battle Fighters, and both were ported to the Neo Geo Pocket Color as Rockman Battle & Fighters.