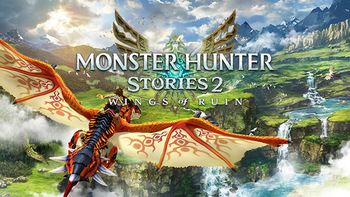 What you've been entrusted with could bring hope or terror.

"A bond with the power to destroy the world."

Monster Hunter Stories 2: Wings of Ruin is a Role-Playing Game Spin-Off of the popular Monster Hunter series and sequel to the original Monster Hunter: Stories, developed by Capcom for the Nintendo Switch and Steam. The game was released on July 9, 2021.

You take on the role of a 14 year old youth from Mahana Village, the central village of Hakolo Island, a tropical island that's home to a society of Riders—peoples who have cultures sometimes at odds with the Hunter culture that dominates much of the world. Riders are capable of taming and using in battle monsters they raise from eggs via a mystical bond enhanced by special ore called Kinship Stones. Your grandfather Red was one such Rider during his lifetime, and he and his Monstie partner Guardian Ratha were the stuff of legends. After the mass disappearances of Rathalos around the world and a chance encounter with Ena, a Wyverian girl carrying a mysterious Rathalos egg given to her by Guardian Ratha; you decide it's time to strike out from home and learn more about not only the disappearances, but your grandfather as well.

The game also received a line of amiibo figures that could be scanned to unlock exclusive costumes for the player character.