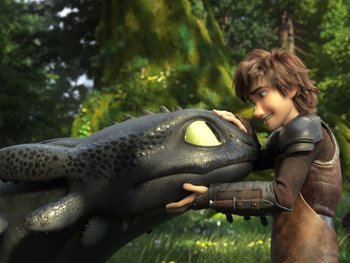 Who's a good dragon? You are, yes you are!
"Dragons, they are kind and amazing creatures that can bring people together."
— Hiccup Horrendous Haddock III, How to Train Your Dragon 2
Advertisement:

European Dragons are traditionally shown as forces of nature, or even symbolic of evil in its purest form. They can only be tamed by the select few, and the ones that don't tend to wreck villages and cities, as well as eat livestock and destroy crops. Almost like predator animals, but bigger and stronger. Expect them to be giant winged beasts, that breathe fire. Eastern dragons are usually more benign, but are powerful, almost god-like beings capable of immense destruction if they are angered.

Then you have these dragons. They're not mean or destructive; in fact, they're downright friendly. These dragons tend to be only slightly bigger than an adult human and have much rounder features. Expect them to be a Friend to All Living Things, or at least a Friend to All Children. If they are a lot bigger than humans, chances are they'll be a Gentle Giant. Small ones may be a Shoulder-Sized Dragon. Despite their friendly nature, disturbing their friends or home can result in a major case of Beware the Nice Ones. If they aren't intelligent enough to talk, they may act like cats.

This is a fairly recent trope as far as depictions of dragons are concerned. The idea of dragons as relatable characters in their own right in European culture can probably be dated back to Kenneth Grahame's short story The Reluctant Dragon, published in 1898. It would not be until the late 20th century, though, that "cute" dragons truly became a fixture of popular culture. Nowadays, such portrayals are extremely common, to the point of almost rivaling the original, more monstrous, portrayals in number.

Compare Lovable Lizard, a much smaller, but equally friendly reptile.