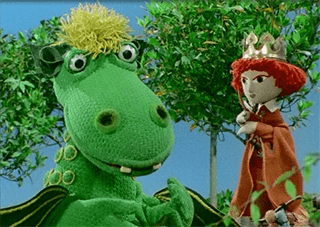 Süsü, a sárkány ("Süsü the Dragon") is a Hungarian Hand Puppet television series. Nine episodes were created between 1976 and 1984, the first being a 53-minute pilot, followed by eight 30-minute episodes. It follows the adventures of a young dragon who was exiled from the dragon kingdom for being too gentle as well as having only one headnote Hungarian fairy tales regularly feature multiple-headed dragons, with at least 3 heads, and often with 7, and accepted into the royal family of a nearby human kingdom.

The stories were also released in book format. A sequel series called Süsüke, a sárkánygyerek ("Süsüke the Dragon-child") was created in 2001, but it never became as popular as the original series.