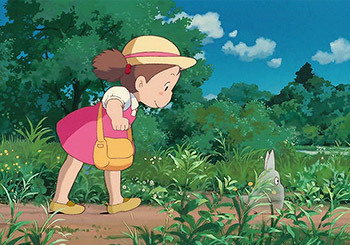 Children — and childlike, innocent (although not necessarily small) beings — are curious and easily distracted. So when a cute, small creature, like a butterfly, passes by them, they will follow it out of curiosity. The small animal will either ignore them, or will be scared and flee.

More often than not, following the critter will lead the characters away from their parents / guardians and into the proximity of some form of danger: a trap, a predator, or even the critter's parent. Alternatively, the critter itself may be revealed to be dangerous. Usually, the guardians arrive just in time to save their child, but that's not always the case.

Related to Attention Deficit... Ooh, Shiny!, Straying Baby and Follow the White Rabbit. Pretty Butterflies are a common choice, but it works with any other small and non-threatening creature, or even some pretty, moving inanimate object.