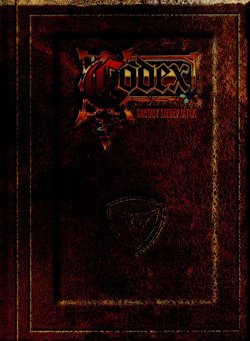 This is the corebook. Did anybody mention that this game is pretty?
The Codex - Fantasy szerepjáték (Codex - Fantasy Roleplaying Game) is a Hungarian tabletop RPG published in 1996, which never was successful but is considered a Cult Classic by many.
Advertisement:

It was created by a disillusioned part of the M.A.G.U.S. development team, that game had a turbulent history, in an attempt to create a system free from all the problems that plagued the other game and a world more to their liking. How much they succeeded is still up to debate.

The lack of recognition could traced back to several factors from lacking (read almost nonexistent) marketing and promoting literature to the rise of the trading card craze.