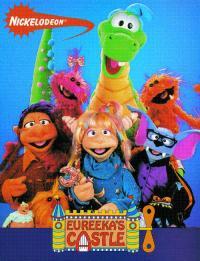 Eureeka's Castle is a children's show that aired on Nick Jr. from 1989 to 1995 conceived by Debby Beece and Judy Katschke, and developed by R. L. Stine (of Goosebumps fame), who also served as head writer. It followed a similar format to Sesame Street (in fact, all of its main cast were alumni of Sesame and/or other Muppet productions) although more in the spirit of another Nickelodeon series, Pinwheel, in that it was a Puppet Show that also featured animated and live-action segments. In its original run, it was two hours long. Between 1999 and 2002, Noggin picked up the short half-hour version. The half-hour version was later syndicated in Canada, where it aired for several years on TVOntario, the provincial public broadcaster.

The main puppet sketches took place in a castle owned by a wizard named Eureeka (also a music box owned by a giant), and featured characters such as Magellan, the dragon, Batly, the bat, Bogge and Quagmire, twin monsters who lived in the moat, and Mr. Knack, a trader / fix-it man who worked in the courtyard.

The show also aired cartoons, often American dubs of UK or European exports, including Roobarb, The Shoe People, Towser, and James The Cat.

As of April 2021, 26 episodes of the show's half-hour configuration are available to stream on Paramount+.

Now has a Character page!