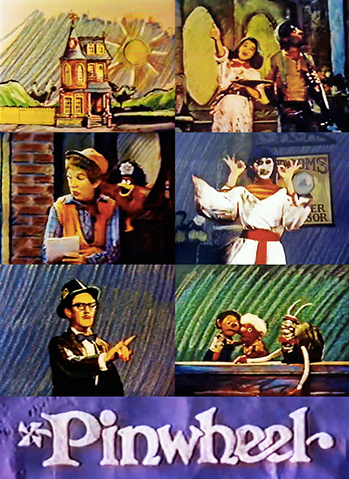 Pinwheel, pinwheel, spinning around. Look at my pinwheel and see what I've found.
Advertisement:

Pinwheel is an educational preschool series. It was the first show on Nickelodeon, as well as the first show to air during the network's Nick Jr. block. The show aired from 1977 to 1984, with reruns until 1990.

The show is set in Pinwheel House, a boarding house powered by a spinning pinwheel on the roof. The boarding house is inhabited by a cast of humans and puppets. Together, the house residents solve problems and play games relevant to preschoolers. Each episode is divided into short segments including skits, songs, photo montages, and animations.

The show's first season premiered in 1977. At the time, Pinwheel was shown exclusively on QUBE, an experimental cable system in Columbus, Ohio. The show was carried on a channel slot labeled C-3, which was dedicated to this one show.note Because Pinwheel was the only show on Channel C-3, many people mistakenly believed that "Pinwheel" was also the name of the channel. The name "Pinwheel" was never used for a network; it was just the name of the show. In 1979, the C-3 channel expanded into a national network called Nickelodeon. Pinwheel remained on the network, now joined by a roster of other shows.

In 1988, Nickelodeon launched Nick Jr., its weekday morning block for preschoolers. Reruns of Pinwheel were the first show to air during the block, and for a time, Pinwheel was Nick Jr.'s flagship show. Since 1988, Pinwheel has been exclusively part of the Nick Jr. brand. Whenever the show is acknowledged by Nickelodeon, they categorize it as a Nick Jr. series, and the social media pages for Nick Jr.

feature Pinwheel every once in a while.

The show's crew members were hired for their previous experience in preschool television, with many of them coming from Sesame Street's production company, the Children's Television Workshop. The show's creator Vivian Horner had previously worked as director of research for The Electric Company, one of Sesame Street's sister programs.