Series / You Can't Do That on Television 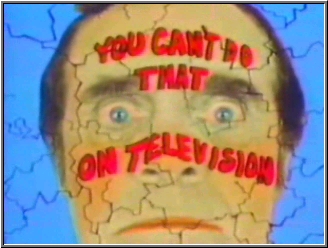 Even the title is a faceful.
Hi, and welcome to sort of a... musty episode of You Can't Do That on Television. The show that makes modern history every week by continually appalling its viewers.
—Christine "Moose" McGlade, the show's host from 1979 to 1986
Advertisement:

Canadian Saturday Morning Kids’ Show Sketch Comedy, running from 1979 to 1990, and rerun on and later produced by Nickelodeon. Heavily birthed and influenced by Rowan and Martin's Laugh-In, borrowing modified and age-appropriate versions of several of Laugh-In sketches (most obviously, the joke wall, redesigned as a set of locker doors; the habit of dumping buckets of water on cast members (though green slime was original) and the announcer) and catch phrases. And, for a short time, borrowing Ruth Buzzi (see below).

First introduced at CJOH Ottawa (a CTV affiliate) as a kids' variety show, the show's wild success in America made it one of the defining shows of Nickelodeon's history. It would run far longer on that network than it did in Canada (a try at a CTV network version of the series in 1979, titled Whatever Turns You On and guest-starring Ruth Buzzi, lasted only one season), and the network's trademark green slime started with this show. The show's influence went beyond Nickelodeon, as homages have popped up everywhere from the sitcom NewsRadio (in one episode, the cast was doused with buckets of green slime and water) to Family Guy (an episode in the 2011-12 season is titled "You Can't Do That On Television, Peter", and in another episode, Peter Griffin is himself slimed for saying "I don't know"). By contrast, the show's profile in its country of origin remained low (aside from spotty airings on CTV and early pay-TV outlets) until it was picked up by the fledgling YTV in 1988 and was finally afforded daily airings in Canada as it enjoyed in the U.S. Of course, that was just in time for the show to be canceled in 1990 due to declining ratings in the States.

Brought Covered in Gunge to North America (and associated it with Nickelodeon). And Alanis Morissette. No, really. The proof is here

. Also, the show was an early writing job for Bill Prady, who went on to create The Big Bang Theory and the 2015 reboot series (on ABC) for The Muppets, which he is no stranger to

In 2012, Shout! Factory released You Can't Do That on Film

, a documentary about the history of the show.

In August of 2017 a reboot overseen by Roger Price, Jimmy Fox and Main Event Media was announced but as of late 2019 it has since been called off.

TV Tropes will not be seen at this time, so that we may bring you this listless trope list.

You Can't Do That On Television has been an End-Of-Your-Trope production.

Announcer: Hehhh, they think this website ruins a person's life? [slowly raises gun to head] Well, they ain't got a job on this show!