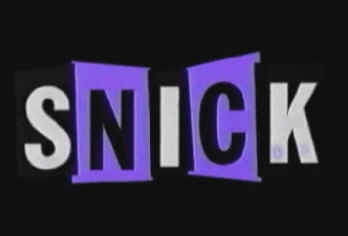 Hop on the big orange couch, you are now SNICKing...

SNICK (short for Saturday Night Nickelodeon) was a programming block on Nickelodeon that ran from 1992 to 2004. This block ran from 8pm to 10pm Saturdays, making it Nickelodeon's first foray into primetime programming. This block was reserved to Nickelodeon cream-of-the-crop programming/premieres and new shows. The first four shows to air during this block were Clarissa Explains It All, Roundhouse, The Ren & Stimpy Show and Are You Afraid of the Dark?. The "big orange couch" served as the mascot of the block.

SNICK was revamped in 1999 as the SNICK House. This iteration saw the block hosted by Nick Cannon from a party house with special celebrity guests and musical performances. There were also kid-friendly music videos that occasionally aired.

The final version of SNICK was the SNICK On-Air Dare that was hosted by the new All That cast in 2002. The All That cast would be "dared" to do outrageous stunts that included bobbing for apples in a toilet, being covered with raw eggs, and other gross hi-jinks. This lasted until 2004, when TEENick Saturday Night took over the slot. Since then the Saturday night programming block has gone through many names but keeps the general purpose of showcasing Nickelodeon's top shows.

SNICK is fondly remembered as being one of Nickelodeon's best programming blocks ever and it launched many beloved shows, such as The Secret World of Alex Mack, All That and The Amanda Show. The Saturday Night kids' programming template has been replicated by Cartoon Network and the Disney Channel but never duplicated.

As of 2011, three classic Snick shows (All That, Kenan & Kel, and Clarissa Explains It All) are being aired in reruns as part of a TeenNick block called "The '90s Are All That", which features the classic Big Orange Couch prominently in its ads. Can you say Spiritual Successor?

The following programs aired as part of the SNICK block: