Series / Are You Afraid of the Dark? 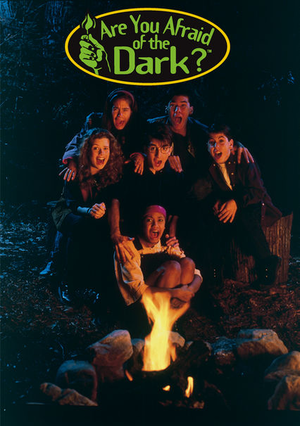 If not, you're about to be!
"Submitted for the approval of the Midnight Society, I call this story....The Tale of the Lost Troper."
Advertisement:

Are You Afraid of the Dark? is a children's horror series created by D. J. MacHale and Ned Kandel for YTV in Canada, while it was also aired on Nickelodeon in the U.S.

The pilot of the show was broadcast on October 31, 1991, and the show originally lasted for five seasons from August 1992 to April 1996. The show was then revived in February 1999note with one of YTV's rivals, Family Channel, taking over the Canadian broadcast rights to that run, in addition to producing it with Nickelodeon, running two seasons before ending again in June 2000. The show was revived again in October 2019 as a limited run series before being renewed for two more seasons, in which it became a Thematic Series with a different Midnight Society cast and horror scenario per season.

The show revolved around a club of teenagers called the "Midnight Society" who meet around a campfire in the woods once a week to tell horror stories. Each of the members had their own quirk and storytelling style; one specialized in fairy-tale like stories, one specialized in Trapped in Another World stories. The show was just like your typical Speculative Fiction/horror anthology series like The Twilight Zone or Tales from the Crypt, but for the early teen set.

The nature of the show's scariness can be likened to R.L. Stine's Goosebumps novels (Stine's books themselves were later adapted into a TV series as well). Creative plots, readiness to completely eschew formula, and genuinely frightening imagery more than made up for the limited budgets. AYAOTD introduced many a child of the 90s to some of their first Horror Tropes, not to mention sci-fi and the occasional dose of Kafka.

While the original Midnight Society went through a few new additions and farewells over the seasons, the show's first revival replaced the entire cast except for Tucker, the little brother of the previous leader Gary, who now led the new Midnight Society. The entire flavor of the stories also changed, becoming less creepy and surprising, and more about leading up to an Anvilicious Aesop. The second revival hit the air after a lengthy production in which it began life as a planned film adaptationnote In November 2017, a film adaptation of the show was announced as in the works from Paramount. It (2017) writer Gary Dauberman was set to write the screenplay with Matt Kaplan producing. The film was scheduled to be released on October 11, 2019, but was removed from the schedule

in February 2019., eventually morphing into a limited series format. This revival would run for a second season, with a third picked up for renewal in March 2022.

The show also had a tie-in video game, The Tale of Orpheo's Curse, released in 1994.

Of course, no description of the series would be complete without mentioning its terrifying opening credits sequence.

If you grew up watching the show, chances are there was a time when you or a sibling would run from the room within seconds of it turning up on the TV screen. In fact, when it aired on the Saturday morning show Scratchy and Co, a voiceover was added over the intro warning people to switch off if they scared easily.

Are You Afraid of the Dark - Ep 65 [Tales of the Night Shift]: Amanda and Colin, a nurse and a patient respectively at a local hospital, slowly start to find evidence something isn't right at the facility when they find drained blood packs in a supply closet, people acting weird, and one of the employee's seemingly found dead.

Are You Afraid of the Dark - Ep 65 [Tales of the Night Shift]: Amanda and Colin, a nurse and a patient respectively at a local hospital, slowly start to find evidence something isn't right at the facility when they find drained blood packs in a supply closet, people acting weird, and one of the employee's seemingly found dead.