Series / Clarissa Explains It All 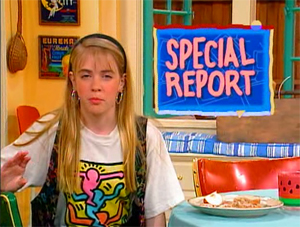 "If you're so smart, explain THIS, Clarissa!"
—Mindless Self Indulgence, "Clarissa"
Advertisement:

One of the earliest original sitcoms on Nickelodeon, about a teenage girl named Clarissa Darling, her geeky, conniving, conservative brother Ferguson, and her wacky hippie parents. Usually featured Clarissa commenting on the plot directly to the camera, imitating a newscaster.

Despite its seemingly innocent reputation, in retrospect, Clarissa had a habit of making subtle references to sex and teen partying, albeit in a light-hearted, contemporary fashion. Also one of the few shows on the channel that could skate by with using and at times spelling out words like "hell" and "sex" onscreen.

Also noteworthy for being one of the first shows to feature a female lead and be gender-neutral. Before this show, the only shows with a female lead (as few as they were) were intended for girls only. It also helped to tear down a long standing belief that shows with female leads wouldn't be able to gain a significant male audience.

The show ran from 1991 to 1994, ending just before the introduction of cartoon programming that would come to dominate the channel in The '90s. Is also notable for being one of the roles Melissa Joan Hart is known for besides being a witch.

In July 2011, it became one of the four inaugural shows of TeenNick's "NickRewind" lineup.