Video Game / Treasure of the Rudra 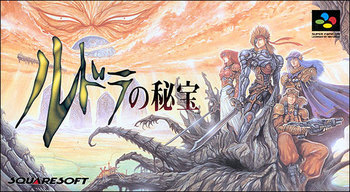 Long ago... When the world was yet wreathed in chaos... It is said that the heaven bestowed great power upon the earth and brought it unto prosperity. Life on Earth was born... Those with great intelligence, The Holy race of Danans. Controlling the seas, The Mermaids. Proud but arrogant... The Reptiles. And possessing incredible strength, The Giants. However, They did not have the Heavens' favor, and in time, they disappeared. Then... The Heavens gave birth once again. Life, 'tis said, flourished anew.
—Opening narration

Released by Squaresoft in 1996, Rudra no Hihou (Treasure of the Rudra) is one of the last RPGs written for the Super Famicom, and Square's last game for the system. The game's major drawing point is its magic system: the player can literally write their own spells, by combining syllables with prefixes and suffixes or by plain trial and error.

Every 4000 years, the earth's dominant race (first danaans, then mermaids, giants, reptilians, and currently humans) is mostly destroyed by a creature known as the Rudra, to make way for the next species. At the start of Rudra no Hihou, humanity has only 16 days left, and the Rudra is about to be born. Four suspiciously stereotypical heroes (a fighter, a wizard, a priestess and a thief) are chosen by fate to save the earth... and all get a Power Crystal violently lodged into their heads. Each with their own friends and their own separate goals, they set out to save their planet and to discover who is behind the oncoming destruction, lampshading and subverting an impressive number of tropes along the way.

The four main characters are:

Rudra no Hihou is very similar to the Final Fantasy series in terms of atmosphere, game play and complexity. Many of the common references to Final Fantasy are also present: there's a Cid with an airship, an Aegis shield, four magical stones, and so on. The game was released in the same stylistic era of SquareSoft as Bahamut Lagoon and Live A Live.

The folks over at Aeon Genesis made a very, very nice English translation patch right here

A warning for those about to play it using an emulator: the game relies very heavily on in-game save states. It's vital to use the ROM's actual memory slots, and the emulator's save slots after saving in-game because the final part of the game opens up after the first three storylines are completed. You'll also need to reload from the title screen each time you want to switch characters. (And, to be on the safe side, be sure to read up on the game's one Game-Breaking Bug.note On day 8 with Surlent, after the bridge breaks, only use the left portal at Thor Vulcano after seeing the events in the lab at Avdol. Due to a programming oversight, you won't be able to get back otherwise.)