I Just Want to Be You! 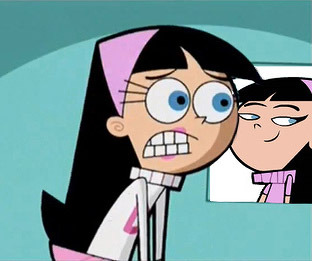 They look like the same girl right? Except they're not. (Hint: Look at their eyes.)
"You had the existence I could only dream of.
Every pleasure at your disposal and you wasted it.
You don't deserve this life, Clark, but I do."
— Bizarro, Smallville
Advertisement:

They will try to be close as possible as the person they envy and/or simply become obsessed with surpassing them.

Given the right circumstances, these kind of characters will swap places with the person they envy. This can result In Grand Theft Me.

May lead to being Driven by Envy. This is a very extreme form of Irritation Is the Sincerest Form of Flattery. Expect lots of Ho Yay if both characters are of the same gender. Compare Napoleon Delusion.

If An Aesop is delivered, it will most likely turn out to be "Be Yourself" or "I Am What I Am".

What are you wearing?

ExtremeDoormat Stacy changes into an outfit that highly resembles Quinn's in an attempt to please her. Quinn is mildly perturbed by this.

What are you wearing?

ExtremeDoormat Stacy changes into an outfit that highly resembles Quinn's in an attempt to please her. Quinn is mildly perturbed by this.