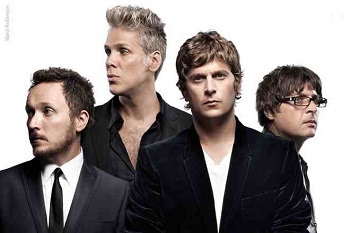 From left to right: Paul Doucette, Kyle Cook, Rob Thomas, and Brian Yale.
It's been a long day
Advertisement:

The band then went on hiatus in 2004, and rhythm guitarist Adam Gaynor left the band in 2005, after performing on the first three studio albums. As a result, Paul Doucette took over rhythm guitar, and the band reunited and released a compilation album, Exile on Mainstream, in 2007, which was certified gold in the United States. After the release, former Push Stars drummer Ryan Macmillan filled Doucette's vacated drum spot. Matchbox Twenty then took another hiatus, but reunited again in 2011. Their fourth album, North, was released in September 2012, with the single "She's So Mean".