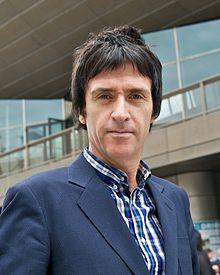 Johnny Marr (born John Martin Maher, 31 October 1963) is an English guitarist from Ardwick, Manchester, best known as one of the two key members (and the least-divisive one at that) of The Smiths alongside Morrissey. His use of layered, jangly guitars and arpeggiation helped give rise to the revival of British Guitar Pop in the 80s and 90s, directly influencing The Stone Roses, Oasis, Radiohead, and nearly every Indie Rock band since.

Since the breakup of The Smiths, Marr has performed as a member of Electronic (with New Order's Bernard Sumner), Modest Mouse, The Cribs, supergroup 7 Worlds Collide, and plenty of session work, including with The The, The Pretenders, and Talking Heads. He released his solo debutnote excluding 2003's Boomslang, which was recorded with one-time backing band The Healers, The Messenger, on February 25, 2013 to an enthusiastic reception, and followed it with Playland on October 6, 2014 to much the same response. He also frequently collaborates with Hans Zimmer on film soundtracks.

He released his autobiography, Set the Boy Free, on November 3, 2016.