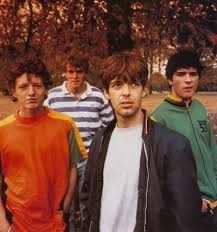 The La's (Scouse slang term for "lads") were a short-lived Power Pop group from Liverpool, England, known for their Retraux sound that was inspired by groups like The Hollies and The Kinks, and their hit single "There She Goes." They released a critically-acclaimed Self-Titled Album in 1990, but because of conflicts between the band and lead singer Lee Mavers' extreme perfectionism, they disowned the final result and broke up shortly after the album's release. Every other release they've done since has been compilation albums and live material. They are notable for being a major influence in Britpop, and many bands such as Oasis and Travis have labeled them as an influence.

The bassist and backing vocalist of the group, John Power, later went on to form fellow Britpop band Cast.

Tropes related to The La's