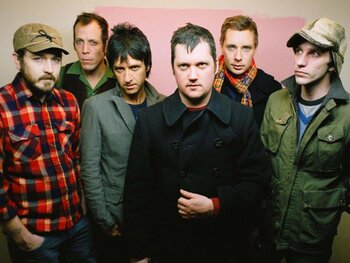 The ocean breathes salty, won't you carry it in
In your head, in your mouth, in your soul.
The more we move ahead the more we're stuck in rewind.
Well I don't mind. I don't mind. How the hell could I mind?
— "Ocean Breathes Salty," Good News for People Who Love Bad News.
Advertisement:

Now let's really talk about them.

Formed in Issaquah, Washington State by Isaac Brock, Jeremiah Green, and Eric Judy. It's named for a story entitled "The Mark on the Wall." It goes:

"I wish I could hit upon a pleasant track of thought, a track indirectly reflecting credit upon myself, for those are the pleasantest thoughts, and very frequent even in the minds of modest, mouse coloured people, who believe genuinely that they dislike to hear their own praises."

And there did it begin: Their legacy of singing about metaphors, so arcanely obtuse that you'd probably need a plum bob just to get your mind straight after a listen.

They made Interstate 8 and The Fruit That Ate Itself, before releasing their next full length album, The Lonesome Crowded West, which is universally lauded by critics, but sold modestly at best. Then came Night on the Sun (another EP) and Building Nothing Out of Something, a compilation album. Eventually came what might be their most acclaimed album to date: The Moon & Antarctica, a bleak and sometimes scary collection of mostly instrumental melancholies. "Mostly instrumental" stems from the fact that Brock had had his mouth wired shut after his jaw was broken between recording sessions. To say that their follow up, Sad Sappy Sucker,note which was meant to be their debut, but was shelved in favor of This is a Long Drive suffered Hype Backlash is somewhat of an understatement.

Then came Green's nervous breakdown. Afterwards, he decided quit the band to work on their own side project. Now without a main drummer, they enlisted the help of Benjamin Weikel, as well as a new guitarist (Dan Gallucci). And lo and behold was Good News for People Who Love Bad News, which not only proved to be warmly received by the fans and critics (though not as much as ''The Moon & Antarctica") but was a commercial success as well; nearly half a year after its release, the band saw a surprise hit with "Float On," their most optimistic song to date.

More good news followed: Jeremiah Green returned, and Johnny Marr of The Smiths replaced Dan Gallucci on guitar. Riding on their newfound (if still relatively small) popularity, they released We Were Dead Before the Ship Even Sank, conceived as an entirely nautical themed album. It was greeted with a great reception, especially with the now-fan-favorite "Dashboard", but a long hiatus was to follow.

It took eight years for the band to release a follow-up album, and Strangers to Ourselves saw more changes to the band's lineup. Not only was Marr gone, but co-founder Eric Judy had left as well. Drummer Joe Plummer also left to join Cold War Kids. The album had decent reviews, but nowhere near the level of acclaim their previous output had received. Brock claimed that the band would release a follow-up album as soon as legally possible, and after nearly the same length of time, The Golden Casket was announced for release in 2021.

One of the more popular indie bands, they remain diverse and unique in style, outlook, and introspection.