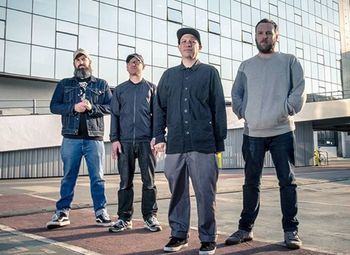 Mogwai in 2017. Left to right: Dominic Atchison, Martin Bulloch, Stuart Braithwaite, Barry Burns
'Cause this music can put a human being in a trance-like state and deprive it for the sneaking feeling of existing.
'Cause music is bigger than words and wider than pictures.
If someone told me that Mogwai are the stars, I would not object.
If the stars had a sound, they would sound like this.
— From "Yes! I Am A Long Way From Home"note an interpolation of a music review of Mogwai by a student named Mari Myren
Advertisement:

Mogwai are a Post-Rock band hailing from Glasgow, Scotland. They are also very hard to describe, due to their eclecticism. A few constants, however, include their very legendary Instrumentals, their love of distortion and effects, and an average song length of about 6 minutes.

Their lineup has included:

Do not confuse with the creatures from Gremlins. Contrary to popular opinion, the band have disproved that they named themselves after said creatures.