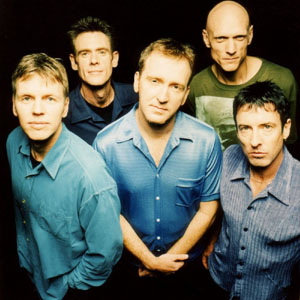 How can we dance when our earth is turning?

L-R: Martin, Bones, Jim, Peter, Rob
How can we dance when our earth is turning?
How do we sleep while our beds are burning?
"Beds Are Burning"
Advertisement:

Midnight Oil are an Australian Hard Rock/Alternative Rock band. They were formed in the early 1970s as Farm, releasing their first album (after becoming Midnight Oil) in 1978. They soon went on to become one of the most popular bands in Australia, with one album staying on the Australian charts for nearly two years. Outside Australia and New Zealand, they are known for one or two songs at most (usually "Beds Are Burning", at most "Blue Sky Mine" too). They parted ways in 2002, but reunited in 2005 and 2009 for benefit concerts. The band regrouped in 2017 for a world tour

Most of their songs focus heavily on social criticism/commentary, with a leftist point of view — they support environmentalism and worker's rights, are opposed to colonialism, and have taken stands against Australian mistreatment of their Aboriginal population. The band's lead singer, Peter Garrett, was Australia's Minister for the Environment, Heritage, and the Arts. He'd run for office before, though, during his tenure with the band.

Their 1987 album Diesel and Dust is considered the best Australian album.

Midnight Oil's music has examples of the following tropes: