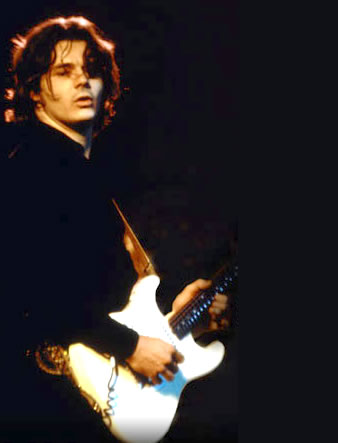 The Steve Miller Band is a rock band from San Francisco that has been active since 1967, led by eponymous guitarist, singer and songwriter Steve Miller. Of course there are other members, but the band's had such a High Turnover Rate in this area that listing them all would turn this page into a Doorstopper. Check The Other Wiki instead

Their initial career was marked by a fusion of Psychedelic Rock with Blues Rock, which contained heavy jamming, improvisation and occasional bits of other genres like Country Music and Folk Music. This style, as showcased on every album between Children of the Future and Recall the Beginning, proved reasonably popular and well-received, with a couple of hits in songs like "Space Cowboy

" and "Living in the USA

", decent chart placements, and positive reviews. Starting with The Joker, Miller toned down the jamming and made his brand of space blues more accessible, with the result being a string of five albums that made the band really, really popular and spawned some famous hits like "The Joker

". The band's popularity entered a downward slide after Abracadabra, and they eventually retired from making albums after 1993, but they still tour every now and then.

They finally emerged from their hiatus in 2010 with a new Cover Album, Bingo!.

In 2016, Miller was inducted into the Rock & Roll Hall of Fame. He wasn't too happy about it, though.

The Steve Miller Band provide examples of the following tropes: