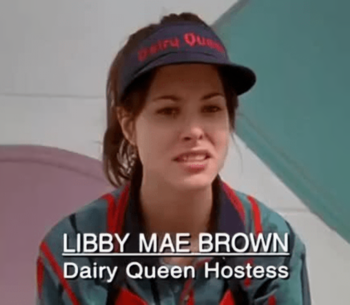 The Deep South/Midwestern farmland (i.e. rural) equivalent to Preppy Name and Ghetto Name and the naming version of Overalls and Gingham. This is a name that instantly marks someone as being from the sticks.

There are a few ways one can name their hillbillies or country bumpkins, none of which are mutually exclusive:

The Australian and British equivalents are bogan and chav names respectively, although the terms typically refer to Whites living in working class suburbs rather than rural regions. Stereotypical names include ones named after cars and alcohol such as "Chardonnay" or "Mercedes", as well as deliberate misspellings of common English names by adding extra "x"s and "y"s or shortening letters such as "Jaxon" or "Jorja".

"Hey, Alison? What's with that lil' blue bit o' letters, right down there?"
"Why that's just The Stinger, Bobby Joe."