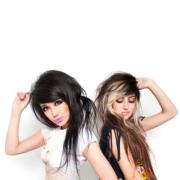 A "band" from Orange County, California, that takes Refuge in Audacity in order to sing songs about sex, drugs, money, and partying with many a Precision F-Strike and an occasional Cluster F-Bomb.

One day in 2007, scene girls Melissa Marie Green, Alisson Green, and Dani Gore booted up their Macs (presumably with the intention of uploading pictures they took of themselves in the mirror with their cellphones onto their Myspace accounts) and decided to screw around a bit with Garage Band. With their current audience in mind, they wrote a deliberately obnoxious song parodying stereotypical Gold Digger cam whores, known as "I Like Money," and then released it as a single. As expected, many detractors arose, but they also found that an unexpectedly large number of listeners actually liked it. So they said why not, named themselves "Millionaires" after the attitude espoused in their "hit" single, and began writing more of such songs.

Soon, the girls gained more haters and more fans. The filthy nature of their lyrics, purposefully-whiny tones of voice, and aggressive sounds of their synthesized instrumentals made the group infamous and prone to being mentioned in many statements by people about their opinions of the worst music ever, much like Brokencyde. However, there is No Such Thing as Bad Publicity, as this venting made a lot more people aware of their existence, including a fair amount who became fans—and their existing fans, it seems, Didn't Give a Fuck.

After writing enough songs and gaining enough fans to make a viable career, they were even able to begin concert tours—most notably, they became regulars in the Vans Warped Tour, along with many other groups largely despised outside of their core demographic. At the height of the genre's success, they were often considered a Crunkcore group, although some consider that label somewhat inaccurate. (They classify themselves as Electronica.) MTV also took an interest in them, and they worked on a number of the Network's projects, including writing and performing the theme of Teen Cribs.

In 2009, Dani Gore left the band to pursue a career in Indiepop (the band, Mr. Downstairs, is quite good

), but Melissa and Allison are still going strong, having gone from obscurity to quite a great deal of success with their audacious approach to music. They now hold their own tours around the United States, occasionally to England, and with fandom in other countries lobbying to get them to visit.Their first feature-length album Tonight was released in 2013. As they said in their debut song, "Millionaires are here to stay."

Tropes Cranked Up to Eleven by Millionaires: