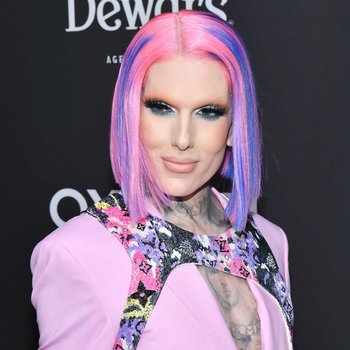 "Barbies, nails and fashion. I'll take everything in baby pink, please."
"Hello, welcome back to my channel! Hi! How are ya!?"
Advertisement:

After moving from Orange County back to Los Angeles, Star began supporting himself by taking on various make-up and modelling jobs once he'd graduated from high school. Ever since he was a child, he had always enjoyed experimenting with his mother's make-up and was known throughout his school years as having an extravagant style; something he regularly talks about on his YouTube channel. He has also stated that he would spend his weekends using fake IDs to get into clubs underage and take on paid make-up jobs for various celebrities.

Star's public career began to take off when he became extremely popular on the social media site, MySpace. His fame escalated once he began appearing regularly in the top tier on the daily rankings listings of the site. He was encouraged to pursue a music career and in the summer of 2007, he was advertised in the line-up of the True Colours Tour.

He released his debut studio album, Beauty Killer in 2009 which included songs Lollipop Luxury featuring Nicki Minaj and was tipped as the 'new Lady Gaga' by Akon. However, in 2013, Star abruptly left the music industry after his second album was never released. Star later appeared in the music video for Kesha's single, Take It Off.

In order to pursue his true passion of make-up artistry, Star decided to launch his own brand, Jeffree Star Cosmetics in 2014. Using what little money he had left after leaving the music business, Star pushed that into his company and promoted the brand via his YouTube channel which had already amassed a large number of followers. His first cosmetics release featured Velour Liquid Lipsticks, which proved incredibly popular thanks to the unusual colours and style that Star was famous for. He then began releasing more products such as highlighters, eyeshadow palettes, lipsticks and scrubs before branching out further to include clothing, accessories and handheld mirrors. The brand was initially online only; however it was released into Morphe Cosmetics stores to buy with the first opening being held in August 2018 in the Westfield Garden State Plaza, New Jersey. Morphe Cosmetics ceased working with Star in July 2020 amid allegations of racism and manipulation.

In 2017, Star and fellow YouTube make-up artist, Manny MUA were sued by Black Moon cosmetics for copyright infringement. However the case was settled.

Star's make-up line has continued to grow since its inception with a range of personalities showing their support such as RuPaul's Drag Race alums, Trixie Mattel and Adore Delano. Star also collaborated with YouTube star, Shane Dawson to produce a make-up collection entitled Conspiracy which was documented in the series, The Beautiful World of Jeffree Star in October 2019. The documentary showed behind-the-scenes at Jeffree Star Cosmetics and the process of creating a new make-up line from initial discussions to release.

Star was in a relationship with Nathan Schwandt from 2015 until 2020 when the pair decided to break up. During their relationship, they lived together in Star's Calabasas mansion along with their pet Pomeranians. Star claims he does not drink alcohol or take hard drugs and never has. He does, however, smoke cannabis, which is legal in the state of California.

Controversy follows Star around and he has been accused of racism and derogatory remarks against minorities. In 2010, Star accused Blood On The Dancefloor singer, Dahvie Vanity of being a sexual predator towards children and named him a 'child fucker' on Twitter. He later tweeted support to the band and promoted an album they released. In 2020, Star took part in an interview with To Catch a Predator host, Chris Hansen to explain that he had no knowledge of any such behaviour taking place and that his tweets were based on hearsay and not complete truth.

Star is well-known for a number of high-profile feuds. His earliest involved tattoo artist and make-up company owner, Kat Von D, who accused Star of racism and bullying. The pair ended their friendship with Kat Von D removing the lipstick shade, Jeffree from her website.

He was also involved in more disagreements with previous friend, Manny MUA as well as YouTube reviewers, Laura Lee and Gabriel Zamora when a picture showing the three friends sticking a middle finger to the camera as a personal insult to Star. The ensuing drama was dubbed Drama-geddon by the YouTube beauty community and would have a large profile and following for most of the year.

Star has also had a dramatic falling out with make-up artist, Tati Westbrook after it was claimed that she had told Star that James Charles was involved in sexually harassing straight men and accused him of predatory behaviour. This resulted in Charles losing an incredible amount of YouTube followers as well as needing to clear his name of the accusations. Charles has never been proven to have been guilty of the behaviour despite Star claiming to have video proof from an alleged victim. Westbrook claimed that Star and Shane Dawson had manipulated her into posting a video on YouTube entitled Bye Sister... which made these accusations public. A year later, she posted an apology video addressed to Charles and stated that it was both Star and Dawson who had masterminded the fallout.This was dubbed Drama-geddon 2 in the YouTube beauty community and drama channels that covered the situation. Star has been the subject of many video essays with significant ones from D'Angelo Wallace raising over 7 million views.