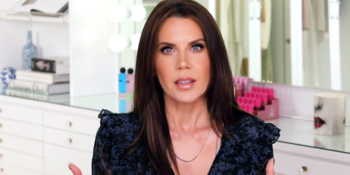 Tati Westbrook is a prolific American YouTube beauty guru and make-up artist. She is known for her motherly personality and her recent controversy surrounding herself and fellow beauty guru, James Charles.

Westbrook is a former beauty consultant and started her YouTube channel entitled, GlamLifeGuru in 2010 which she later changed to simply, Tati. She reached the one million subscriber milestone in 2016 and remains one of the most popular beauty channels on the platform. In 2018, she launched her own company, Halo Beauty which focused on vitamin supplements.

Westbrook, although popular on the platform, was known to be drama-free unlike the majority of larger beauty channels on the YouTube platform. However in 2019, Westbrook had posted a story to her Website/Instagram stating that she felt betrayed by the community. She later posted a video to her channel entitled Bye Sister.... She talks about her friend and collaborator, James Charles and how she believed he had been preying on heterosexual men and manipulating sexuality. This came after Charles had posted on his own social media an advertisement for a rival vitamin brand. As a result of her video, Westbrook gained four million subscribers where Charles lost three million. In May of 2019, Charles posted a response video presenting evidence to refute Westbrook's claims of predatory behaviour.

In 2020, Westbrook posted a video that apologised to Charles for the previous year's accusations and stated that she was manipulated into making the video by Jeffree Star and Shane Dawson.

This creator shows examples of: