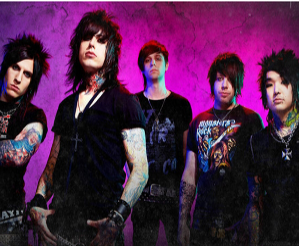 Falling in Reverse is a screamo/metalcore band from Las Vegas, Nevada. They were officially formed when their lead singer Ronnie Radke — former vocalist from Escape the Fate — was released from prison in 2011. They released their debut album later that same year.

The band was notorious for the drama surrounding their lead singer and their rivalry with Escape the Fate. Ronnie Radke was arrested in 2008 following run-ins with the law over narcotics possession and battery charges for a fight that left an eighteen year old dead. Whether Radke was asked to leave the band or was fired, either way, some bad blood seems to have come out between the rest of the band and Radke. In 2013 Ronnie made up with Craig and announced a joint tour between the bands.

Originally the band's image was somewhat the "bad boys" of post-hardcore, between having one album dedicated to insulting Ronnie's former band and another dedicated to flexing like mainstream rappers. Inadvertently helping this was Ronnie having several run-ins with the law even after getting out of jail, including being arrested for assault after throwing 2 mic stands into a crowd, something he deeply regrets. Starting with "Just Like You" the band presented a much more serious image, with none of their prior ego.